Mobile data synchronization is becoming increasingly important for many people, and various standards have arisen to perform this two-way copying 'over-the-air'. The most important platforms that can do wireless synchronisation are ActiveSync that is used to communicate with Exchange Server and Research-in-Motion's BlackBerry Enterprise Server (BES). Both solutions require proprietary server-side software from the vendor, therefore limiting the use of PIMs (personal information managers) to either wired synchronization or irritating 3rd-party synchronizers requiring the installation of client software on the PDA. 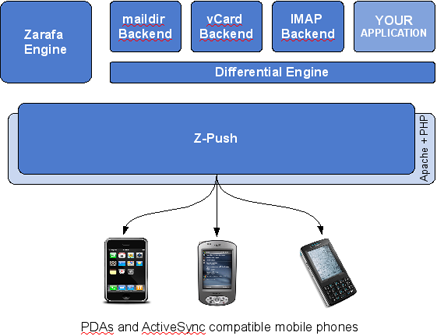 This is where Open source Z-Push comes in; it is an implementation of Microsoft's ActiveSync protocol which is used 'over-the-air' for multi platform active sync devices, including Windows Mobile and active sync used on Apple's iPhone, Sony Ericsson and Nokia phones. Open source Z-Push enables any PHP-based groupware package to become fully syncable with any ActiveSync-compliant device.

Being an opensource project under the GPL, it allows developers to add their own backend so that Z-Push can communicate with their groupware solution.

To enable Z-Push login to the BlueOnyx GUI and enable it under "Network Services" / "Email" by ticking the checkbox "Enable Z-Push" as shown below: 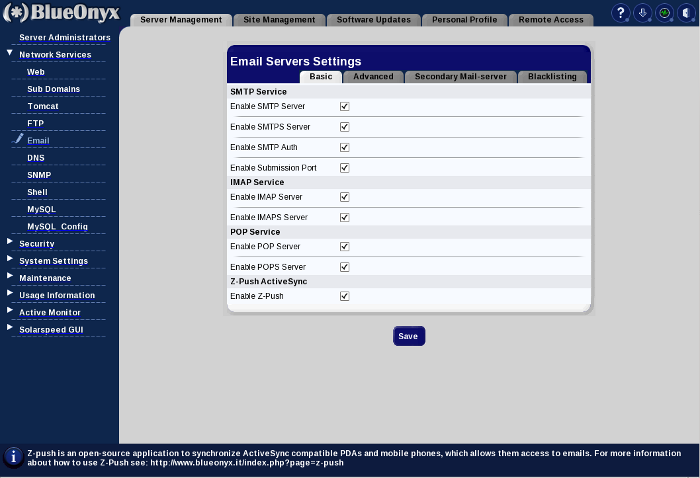 That will enable Z-Push for each site and user on the server.

Does it work with my mobile phone or PDA?

A working internet connection to your Z-Push enabled server is necessary.

How to configure your PDA or mobile phone to use Z-Push:

This pretty much depends on the PDA or Phone. Below is an example for the Apple iPhone:

If you want to use SSL:

Sync of calendar and address book may or may not work, but email mostly does. I encountered some problems with being unable to delete messages from my inbox. To fix this I had to do login to that mailbox once with either RoundCube or Squirrelmail (or any IMAP client!), which created some missing folders ("Drafts". "Sent Messages", "Trash").

Afterwards that seemed to work as well.

Small reminder to everyone that CentOS 6 goes EOL on 30th Nov 2020.

A large number of updates have been released for BlueOnyx 5209R and 5210R to fix various pending issues.

Todays YUM Updates for CentOS 8 seem to cause issues with Apache.