You are here: Welcome to BlueOnyx» FAQ» Multiple PHP versions

CentOS 8 has been released

CentOS 8 has (finally) been released. The development for BlueOnyx 5210R is now underway at full steam.

After a considerable delay CentOS 8.0.1905 has finally been released. Back in December 2018 we already started preliminary development of BlueOnyx 5210R on the RedHat EL 8 Beta. That development went as far as we could take it without having access to the "real deal" and allowed us to port almost all components of BlueOnyx to EL8. The main issues were the newer PHP version and all aspects of the GUI had to be overhauled to replace now deprecated PHP functions and features. Likewise BlueOnyx 5210R was directly adapted to use a newer CodeIgniter for the fundamentals of the GUI interface. Back in August 2019 this resulted in a semi-finished BlueOnyx 5210R that would have been production ready - if the base OS had already been CentOS 8. But it was still the RHEL8 Beta, which isn't and wasn't a finished or polished product.

A key problem we ran into during the development prior to the actual release of CentOS 8 was the absence of many fundamental components in the RHEL 8 Beta YUM repositories. Of course early this year EPEL or other RPM repositories had not yet caught up. So we ended up building SRPMs and RPMs for all the missing components. Which boiled down to us providing around 300 RPMs for missing dependencies.

Now with CentOS 8 finally being out we need to go through that list of dependencies and check if they are now provided by the OS itself and in which versions. Wherever possible and feasible we will use the OS supplied versions to minimize maintenance overhead for future updates. Because for anything *we* provide we will need to accept the challenge to provide security updates until the EOL of CentOS 8.

Final work on BlueOnyx 5210R until its release

Today we set up a new build box based on the CentOS 8 ISO image: 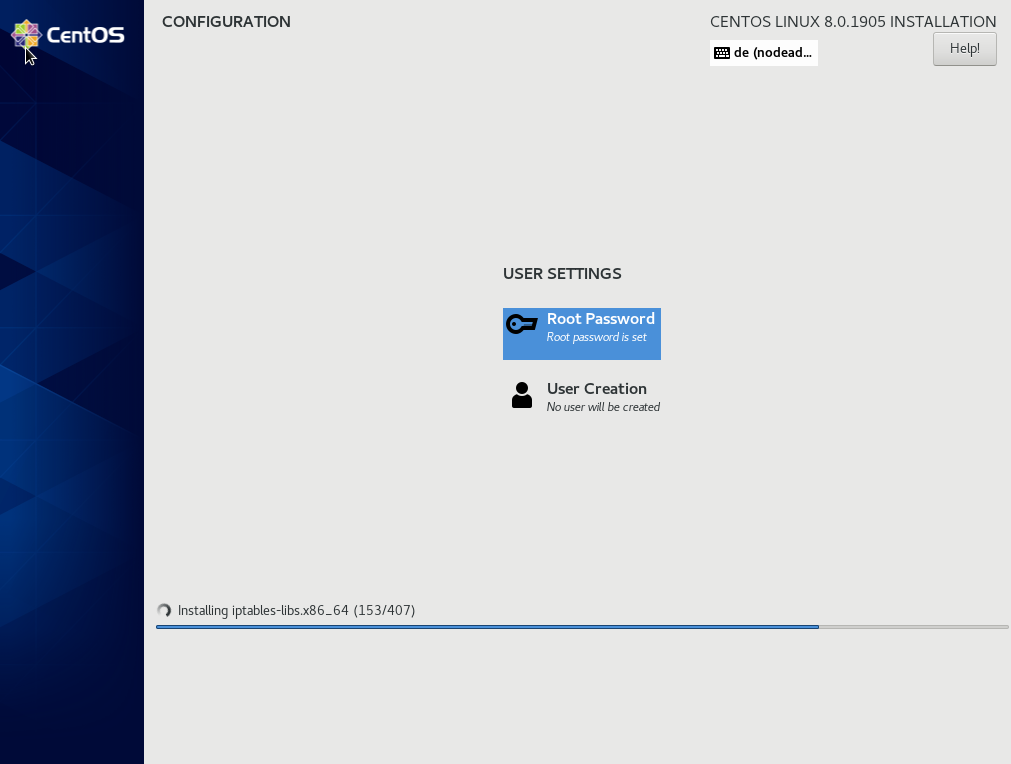 On that build box we've now imported the basic build and repository environment that we already had on the RHEL8 Beta since December 2018. SVN checkouts are currently running and we're grabbing all the RPMs we need to complement a working build environment that - as much as possible - relies on supported upstream RPMs. Once that's done we'll piece together which RPMs and SRPMs we need to supply to augment the build and actual production environment. Then all needed RPMs need to be recompiled on the actual CentOS 8 build box and the YUM repositories get re-populated with the results. The estimate is that this will take the rest of this week and perhaps a part of next week.

The rebuilt RPMs from the new 5210R YUM repository will be used to install a BlueOnyx 5210R test server that we try to get production ready. This may require some final fixes to base-network and base-wizard and perhaps some other components of BlueOnyx.

The next goal is to get the code to a point where we want to be able to get a working BlueOnyx 5210R done via "yum groupinstall blueonyx" on a "naked" CentOS 8 (minimal install). Once that works we can start the process of building ISO images for BlueOnyx 5210R. There seems to be a version of Pungi in the EPEL YUM repositories, so we might be able to easily adapt our current ISO building method from 5209R to also create 5210R ISO's. Which would be a great time savior. I expect we might have the first ISO image of BlueOnyx 5210R ready in the middle or end of October, provided there are no unforeseen challenges or obstacles.

All things considered: I'm fairly confident that BlueOnyx 5210R will be out by end of October.

When will it be production ready?

Even if we have BlueOnyx 5210R out by end of October: There will be issues. After six months porting the GUI to EL8 and about three months of integrating new features there might still be some odds and sods that don't immediately work as expected. These will be as quickly fixed as they are identified and we will appreciate if you give BlueOnyx 5210R a test ride to help us find and identify such problems.

We also still need to port a fair chunk of our commercial PKGs over from 5209R and create 5210R versions for them. At this time the WebApps are already ported, but the AV-SPAM, Automated Backup, OpenVPN and the additional (optional) PHP and MariaDB packages for all the various versions beyond what the OS supplies aren't ready yet. This will be completely addressed until the end of November 2019 - if not sooner.

So a tentative date for complete production readiness of BlueOnyx 5210R is late November or early December 2019.

How to migrate from older BlueOnyx versions to 5210R?

There are two ways how you can migrate from any older BlueOnyx to BlueOnyx 5210R: Our new "Easy Migrate" or the traditional "CMU". Needless to say: "Easy Migrate" is the far easier and cleaner method and should - by all means - be preferred.

BlueOnyx 5210R and everything directly connected to it will keep us busy until the end of the year. But it sure doesn't stop there. Preliminary work has started to port BlueOnyx over to Debian 10 as well. This is still in the earliest of stages and actually will now be put on ice for a bit. But once the work on BlueOnyx 5210R has finished we'll be back at working at a Debian 10 port of BlueOnyx, which has tentatively been named BlueOnyx 5310R. It will have the same feature set as BlueOnyx 5210R and the only real difference will be the base OS. There are no expectations to have it ready in any shape or form before summer of 2020 and even then it'll have it's fair share of the usual teething problems. If you plan on holding off on the CentOS 8 based BlueOnyx 5210R until a Debian 10 based BlueOnyx 5310R is ready? Don't. It's way to early to predict when that actually might be ready. In any case: Remaining on a CentOS based distribution is less of an administrative change for you as an end user or server administrator.

With that being said: We're back to work on getting BlueOnyx 5210R ready ...

The TestDisk Data Recovery Tool and why you should know it.

Her is a small preview of something we're currently working on: "Easy Backup".