These extend the existing API on 5209R and (finally!) adds a fully working API to BlueOnyx 5210R as well.

These updates also introduce changes to the "Cross Site Request Forgery" (CSRF) protection in BlueOnyx. IPs added to the field "API Host(s)" under "Server Management" / "Maintenance" / "API" are now excluded from the CSRF protection that usually protects the GUI against unsolicited POST and GET requests. 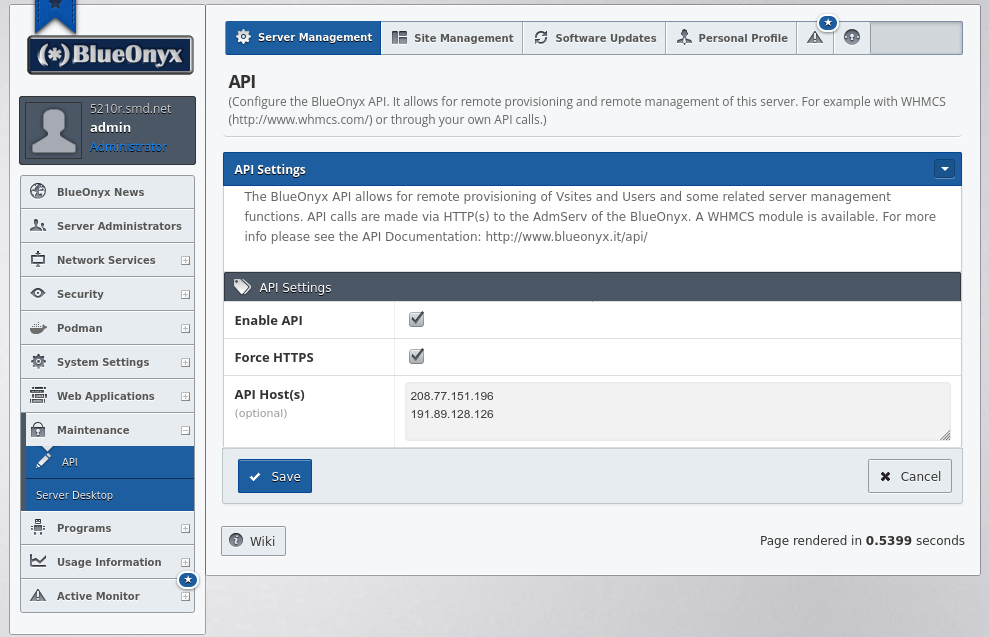 The API documentation has been updated as well and new screenshots and usage clips have been added to it.

Additionally a new WHMCS integration for BlueOnyx has been released. It's the whmcs-blueonyx-5200R-server-module-v2.4-1.tar.gz tarball.

In WHMCS you can use these to automatically provision "Shared Hosting" accounts against 5209R or 5210R servers.

The updated modules now also allow you to specify which PHP method created Vsites should use and which PHP version should be activated (provided suPHP or FPM is used in the product).

Additionally on products deployed via the 5210R WHMCS module you can choose which type of shell should be activated for the Vsite and the auto-created siteAdmin user:

In the 5209R WHMCS module the only available Shell options are (of course) still only "Yes" or "No", where "Yes" would mean a full shell if deployed against a 5209R.

You can use the 5209R module to deploy products on a 5210R, but instead of a full shell a user would (at best) receive "Chrooted (SFTP SCP RSYNC)".

The 5210R module *can* be used to safely deploy against 5209R servers, provided the checkbox for Shell isn't ticked in the product(s).