A vulnerability in Polkit's pkexec component identified as CVE-2021-4034 (PwnKit) is present in the default configuration of all major Linux distributions and can be exploited to gain full root privileges on the system, researchers warned today.

CVE-2021-4034 has been named PwnKit and its origin has been tracked to the initial commit of pkexec, more than 12 years ago, meaning that all Polkit versions are affected.

Part of the Polkit open-source application framework that negotiates the interaction between privileged and unprivileged processes, pkexec allows an authorized user to execute commands as another user, doubling as an alternative to sudo.

Researchers at Qualys information security company found that the pkexec program could be used by local attackers to increase privileges to root on default installations of Ubuntu, Debian, Fedora, and CentOS.

They warn that PwnKit is likely exploitable on other Linux operating systems as well.

... as "root" removes the SUID-bit from /usr/bin/pkexec and mitigates the issue until upstream (CentOS, AlmaLinux, etc.) release updated "polkit" RPMs that permanently fix the issue.

Below is a list of available hotfixes and updates listed by platforms:

Despite CentOS 6 and SL6 being EOL for quite a while now, there are still substantial numbers of BlueOnyx 5207R/5208R servers around. As "yum update" on them is broken since the upstream repositories went away, a YUM update could not be provided in a sensible fashion. Therefore we released an updated "polkit" RPM (built from the Red Hat Enterprise Linux Server 6 - Extended Life Cycle Support Errata page SRPM) as PKG file. You can download and install this in the GUI via NewLinQ. The PKG is named "Polkit". The "Polkit" PKG is available to you on BlueOnyx 5207R and BlueOnyx 5208R even if you do not have any ongoing NewLinQ subscription. 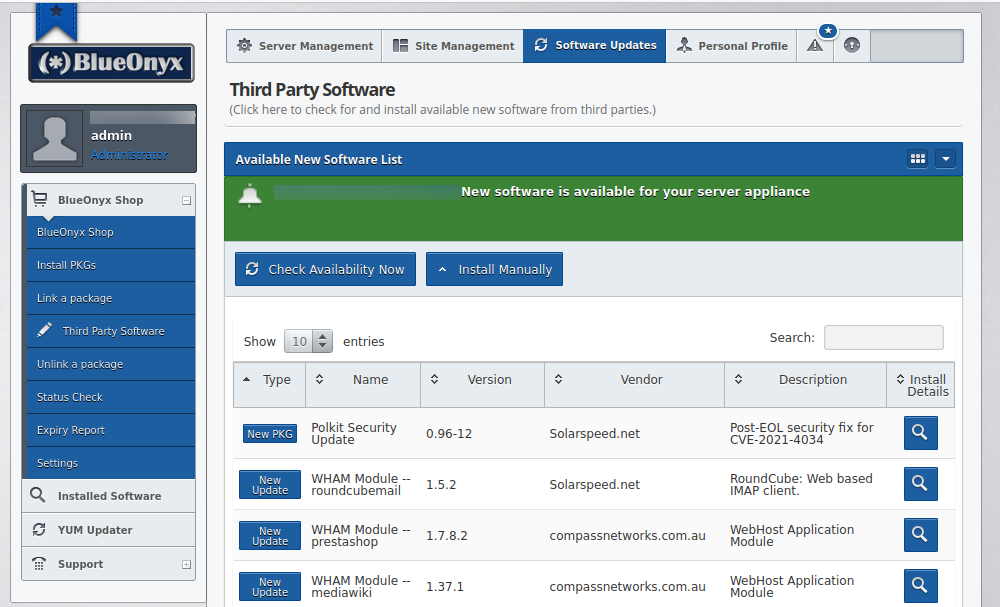 To ensure safe operation of your BlueOnyx and Aventurin{e} servers please make sure to have all updates installed.

Developer diary entry about re-spinning an AlmaLinux 8 ISO to provide us with a custom BlueOnyx 5210R installation ISO.